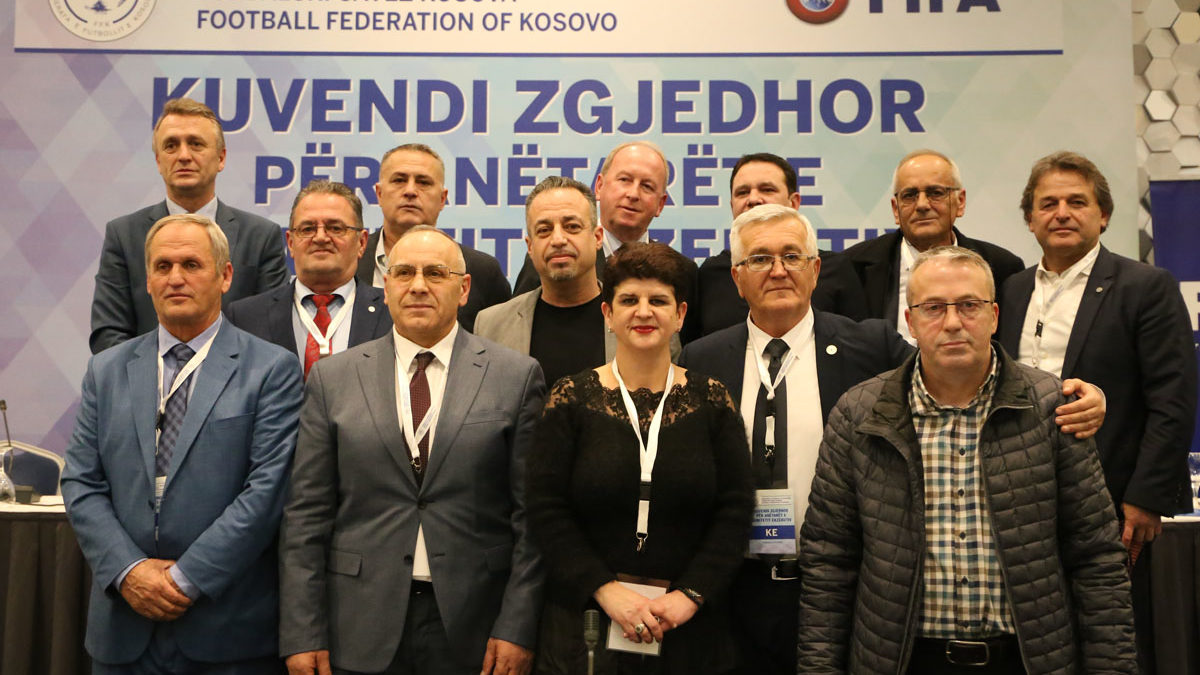 27 January 2020 – The Football Federation of Kosovo held today the Election Assembly for the members of the Executive Committee. The meeting was attended by 55 of the 58 delegates of the Assembly, while its proceedings were closely followed by the FIFA Representative, Oliver Jung, UEFA Representative, Denis Bastari, the Secretary-General of the Albanian Football Federation, Ilir Shulku and the Vice-President of the Albanian Football Federation, Lutfi Nuri, the Kosovo Olympic Committee (KOC) President, Besim Hasani and the Director of the Sports Department, Iber Alaj. The FIFA President’s delegate, Olivier Jung, greeted the participants at the beginning of the proceedings. 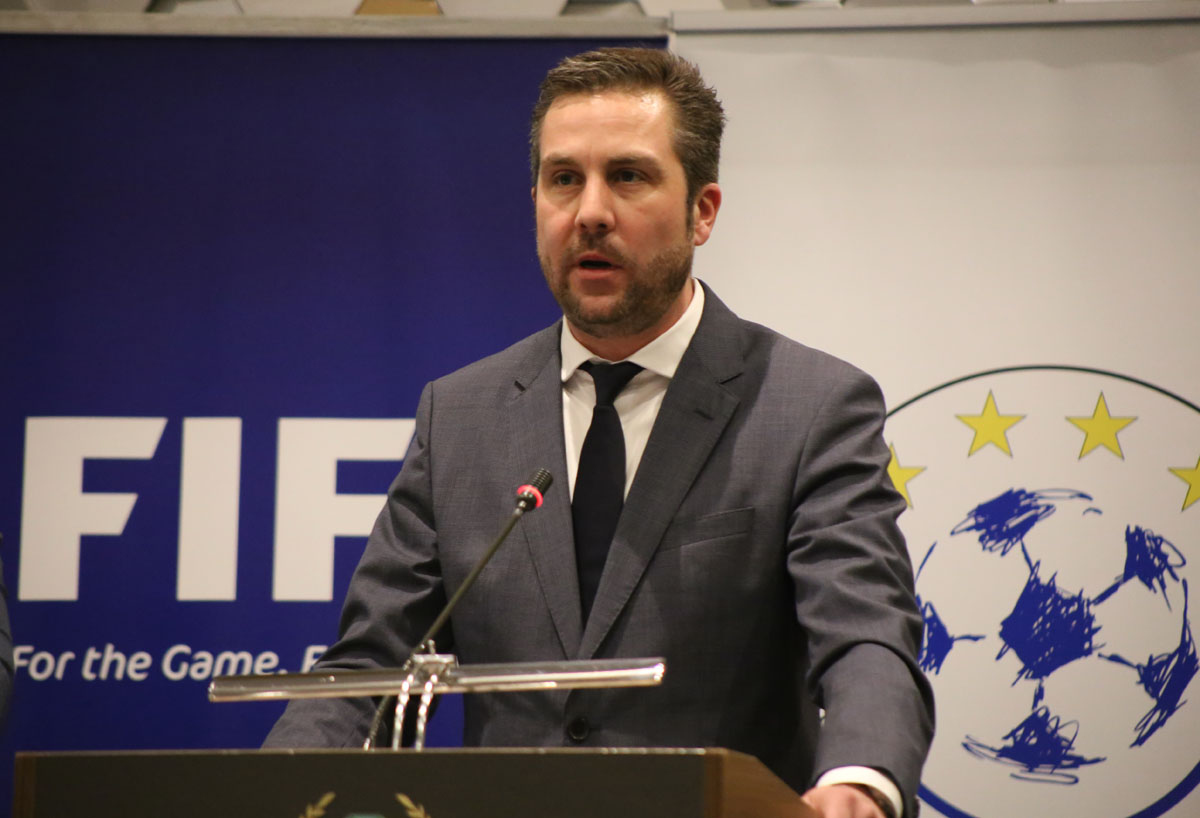 “Dear President Agim Ademi and dear participants. I am here to convey the best wishes for this assembly from President, Gianni Infantino. FIFA is very connected to all its members and always supports them. We, along with UEFA, always support our members through development projects. Our goal is to increase the development of football. FFK has benefited from many projects from FIFA in the development of women’s football and young age groups, as well as the construction of synthetic grass fields. FIFA will continue to support FFK in development projects in the coming years. President Ademi and his administration have done a great job. They have a vision, but you, the Regional Leagues and all those who are part of football, must have such vision too, in order to keep up with the development of football. Success is not achieved overnight but with continued work much can be achieved and FFK is doing so. The unity of this association is very important. I thank President Ademi for the work and transparency so far, as this has facilitated our work and we have achieved it so far by making many reforms. So do not be afraid to make the right decisions for the sake of football” Olivier Jung said, wishing Kosovo success in the match against North Macedonia in Skopje on 26 March. 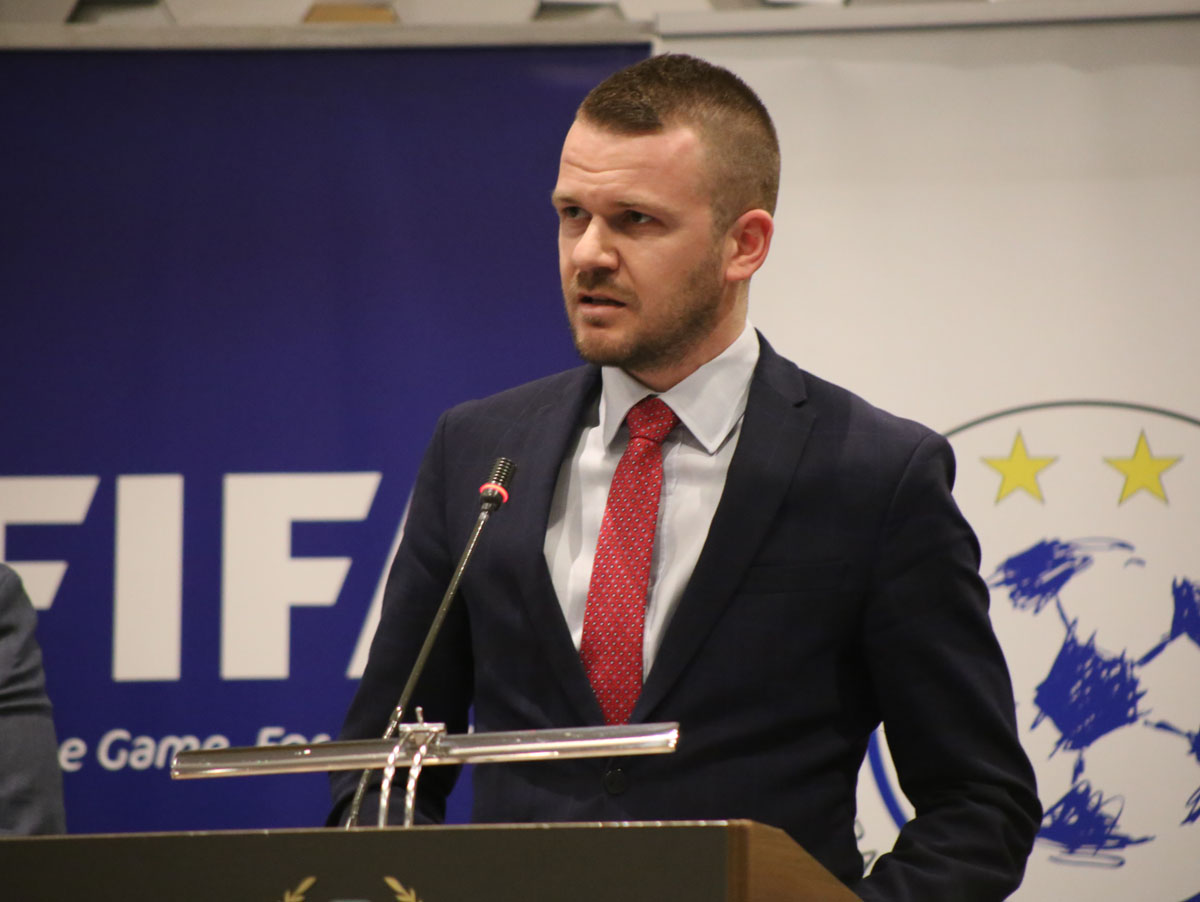 On behalf of UEFA President, Alexander Ceferin, Denis Bastari delivered a speech: “Initially I convey the warmest greetings of UEFA President, Alexander Ceferin and the Secretary-General, Theodore Theodoridis. It is very important for UEFA to have close relations with our members and also the opportunity to observe closely all changes in terms of various projects and programs, but also the internal changes taking place in the Federation. FFK remains the most recently accepted member of UEFA, but of course the development that has been made in recent years is very visible and we are very happy to be able to see continued progress. Of course there is always room for improvement and criticism is sometimes justified for a new member like you, but considering that you only joined FIFA and UEFA four years ago, everything is justified. UEFA is very alert to any developments that take place in Kosovo football and certainly in some cases we were concerned with certain rumors circulating around FFK or interfering with the work of FFK. On this occasion I ask that all members be united and work together for the good of football and the future of children playing football in Kosovo. It is very important in the eyes of international community to respect the democratic rules and principles that you have adopted. Developing football in Kosovo is far more important to all of us than the personal interests of any individual. Therefore, UEFA will by no means allow these interests to harm the development of football in Kosovo” Bastari said, who congratulated Kosovo on the excellent results in the Nations League and the qualifications for Euro 2020.

Attendees were greeted with a speech by the Secretary-General of the AFF, Ilir Shulku, KOC President, Besim Hasani and Director of the Sports Department, Iber Alaj. Given the contentious voices of some of the club’s representatives in media for a long time over his four-year term, President Ademi expressed his willingness to seek the vote of confidence of delegates as well. However, after some deliberations by delegates, in some cases disrespecting the culture of debate, with the majority of votes the agenda and the election of the members of the FFK Executive Committee, consisting of: Bakir Burri, Agim Dibrani , Predrag Jovic, Vjollca Krasniqi, Ismajl Ajeti, Xhelal Broja, Mirsad Çollaku, Ilaz Mjaku, Naser Ajeti, Flamur Bunjaku and Agim Nura, were finally voted. After the voting process, some delegates expressed dissatisfaction and left the room, but FIFA representative intervened by explaining everything. “Here we see the majority of delegates voting for the Executive Committee and we have a democratic process. Those who came out can take a coffee break, but you can still have the majority” Olivier Jung said. The proceedings of this Assembly at the request of President Agim Ademi were closed with a minute of applause in honor of the former President, Fadil Vokrri. 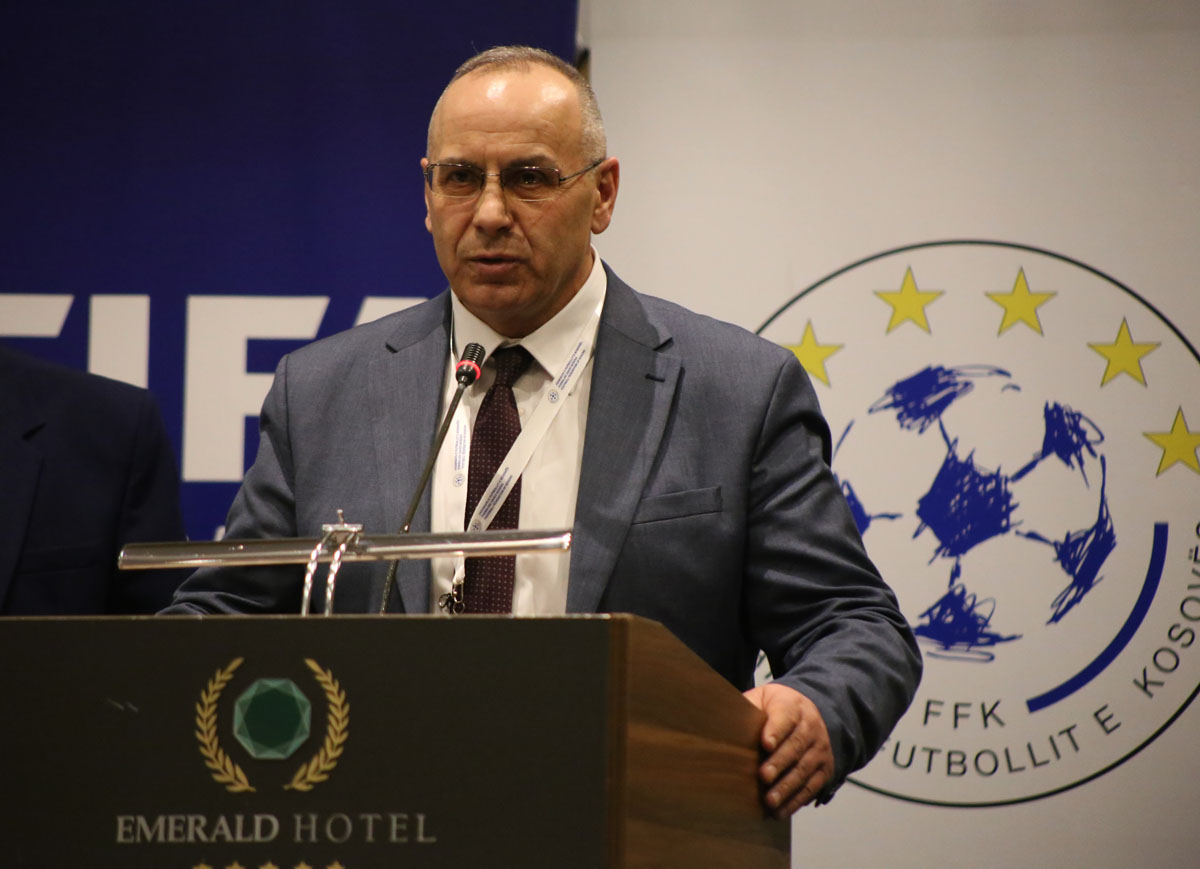 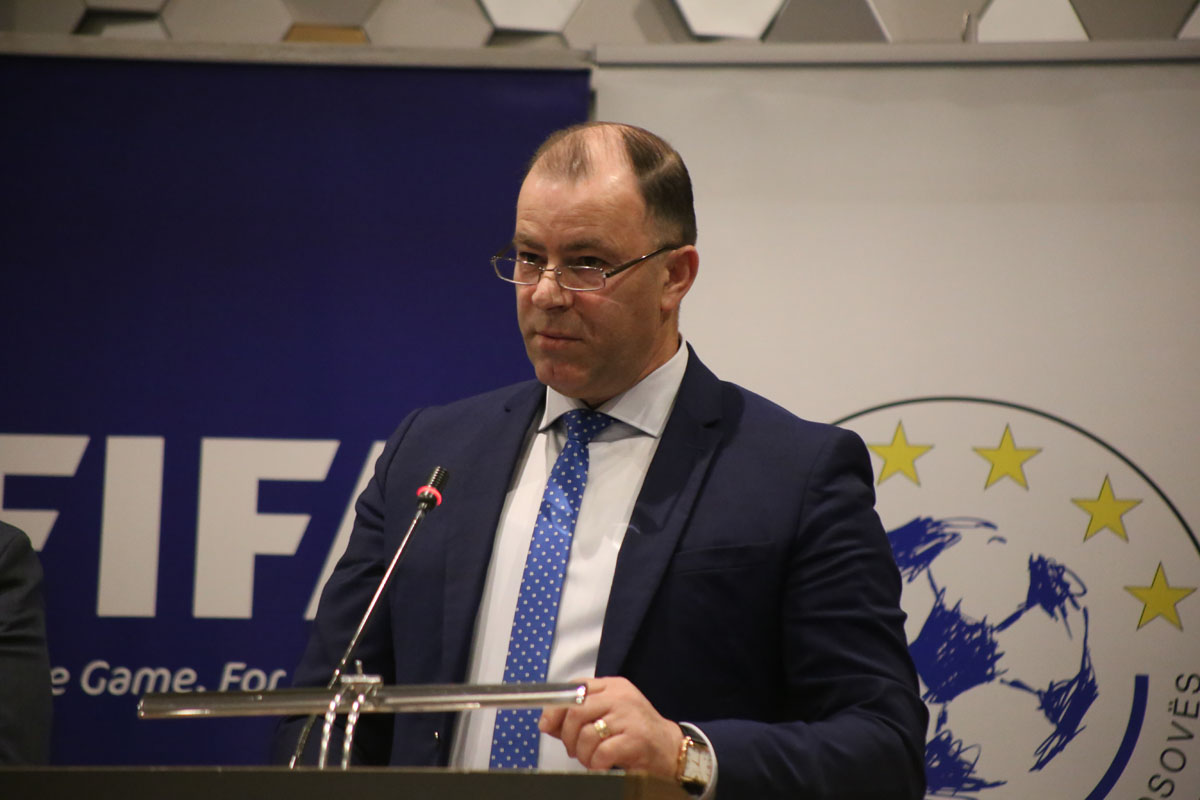 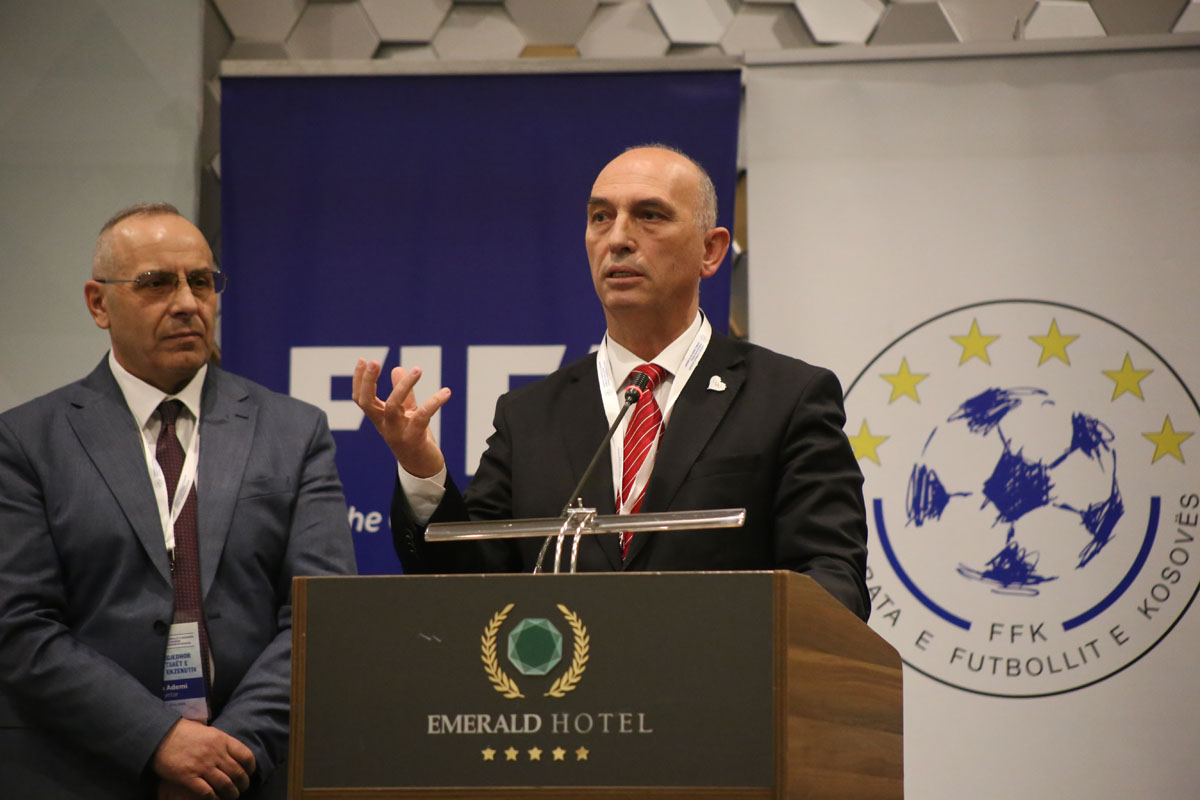 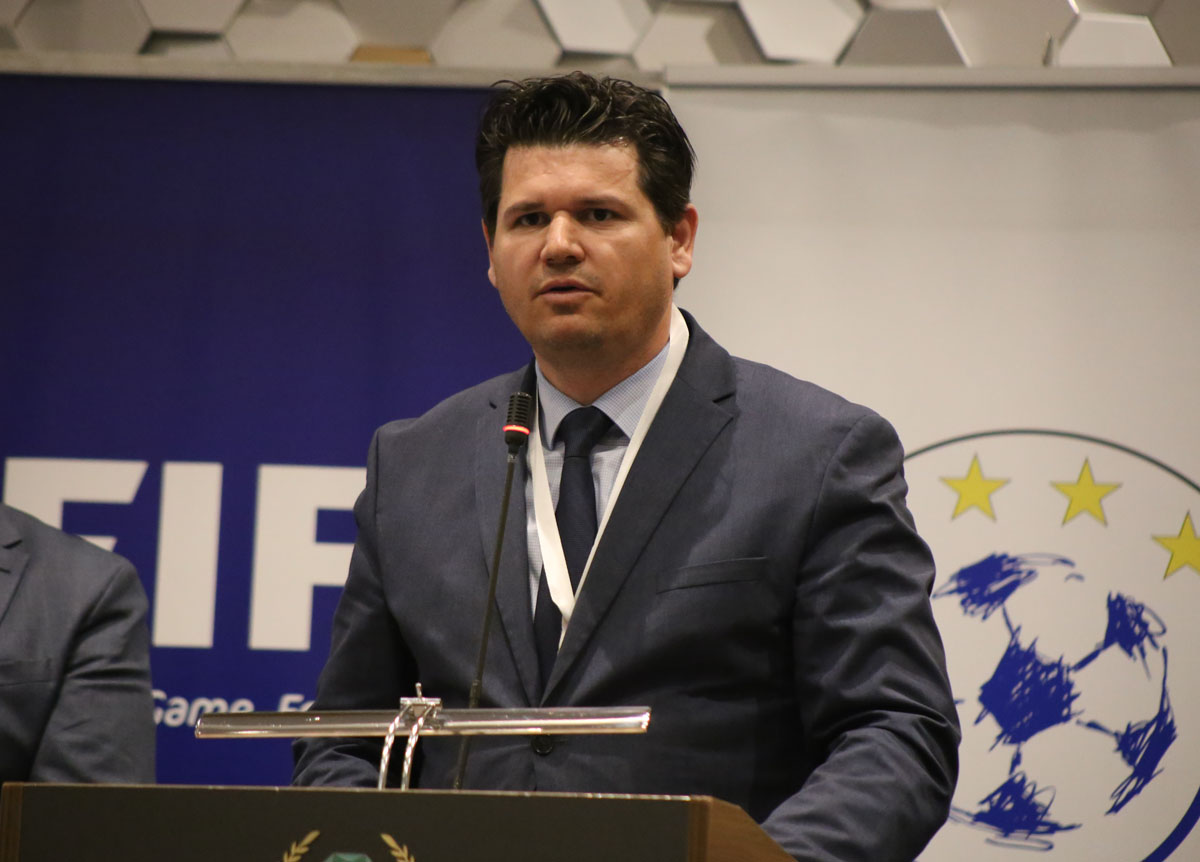 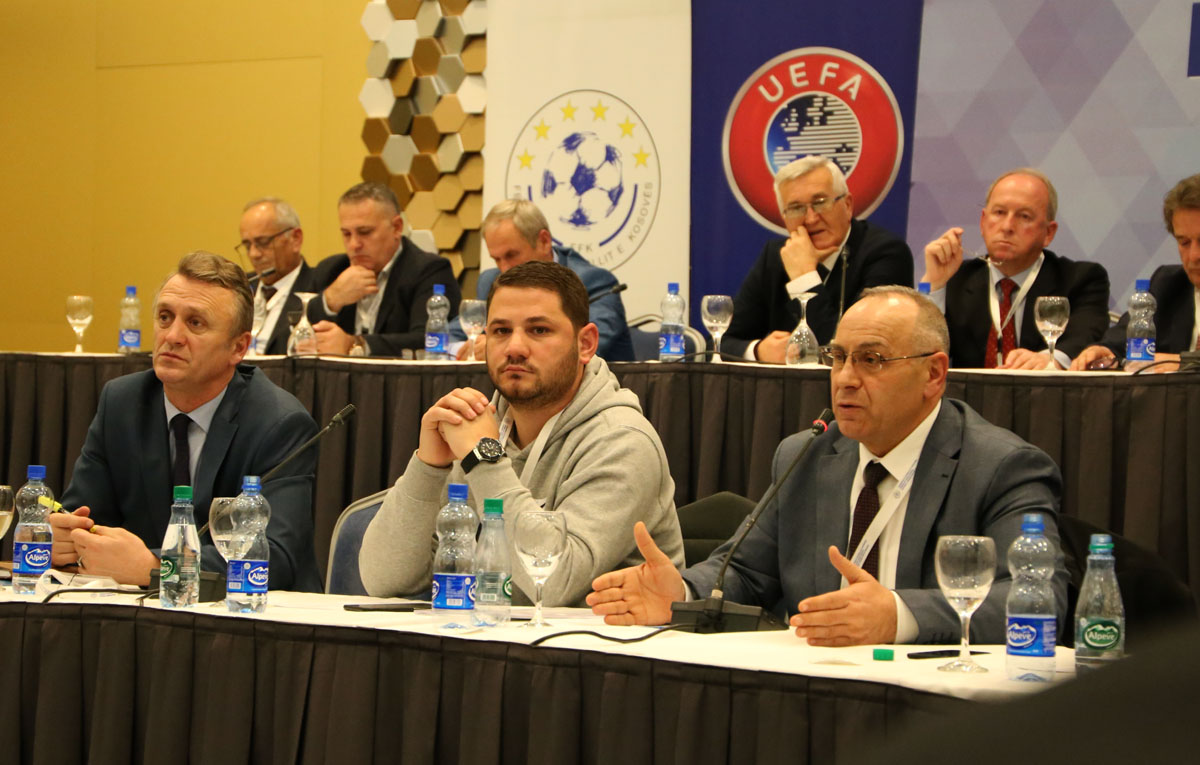 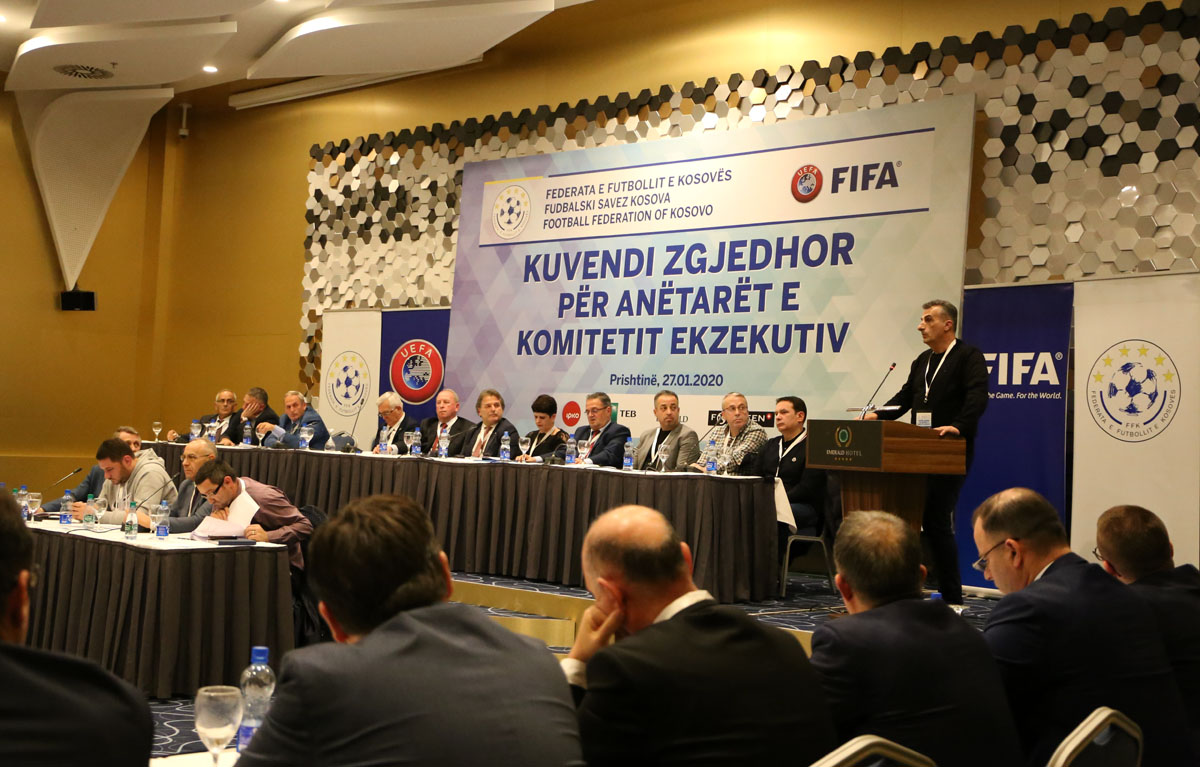 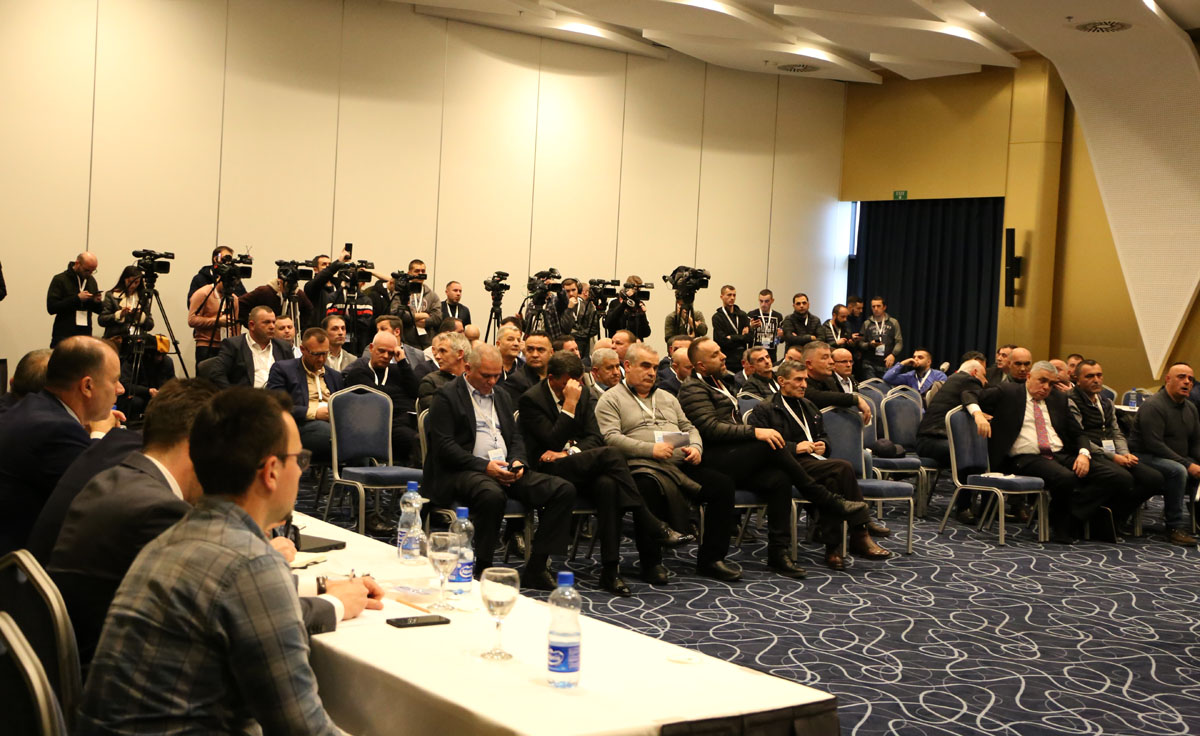 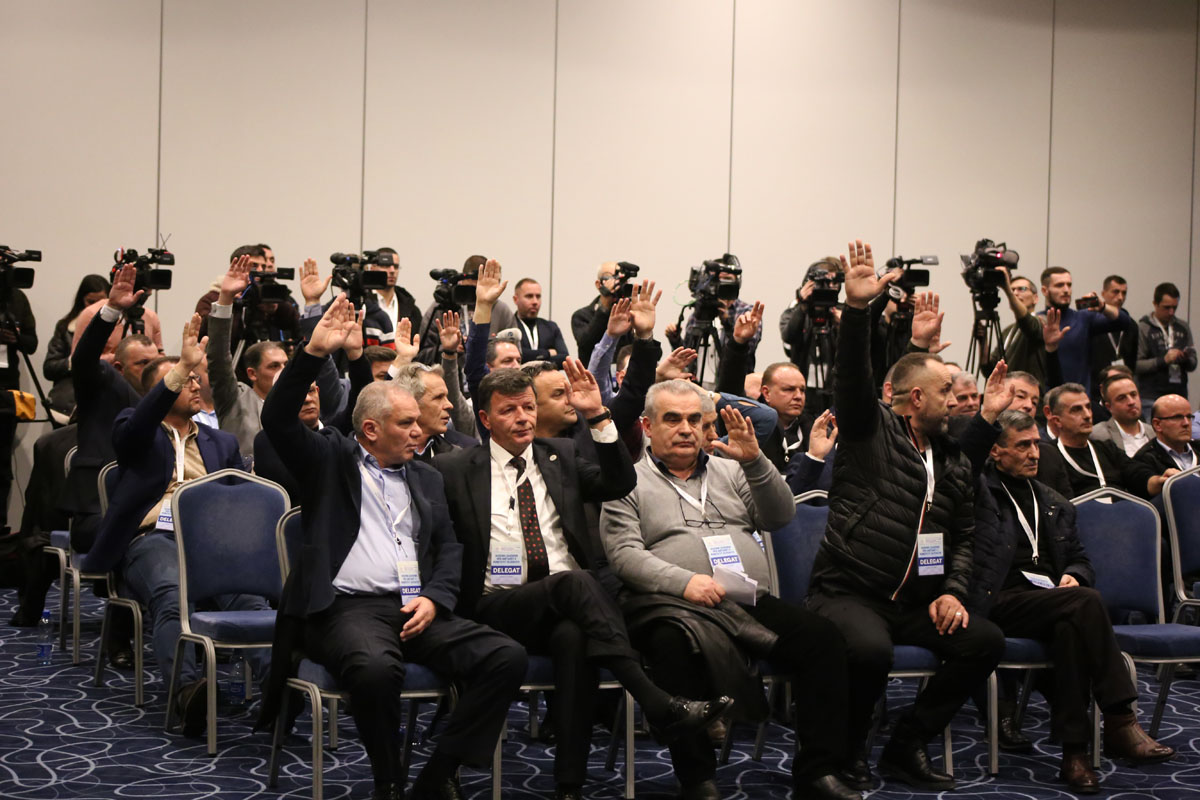 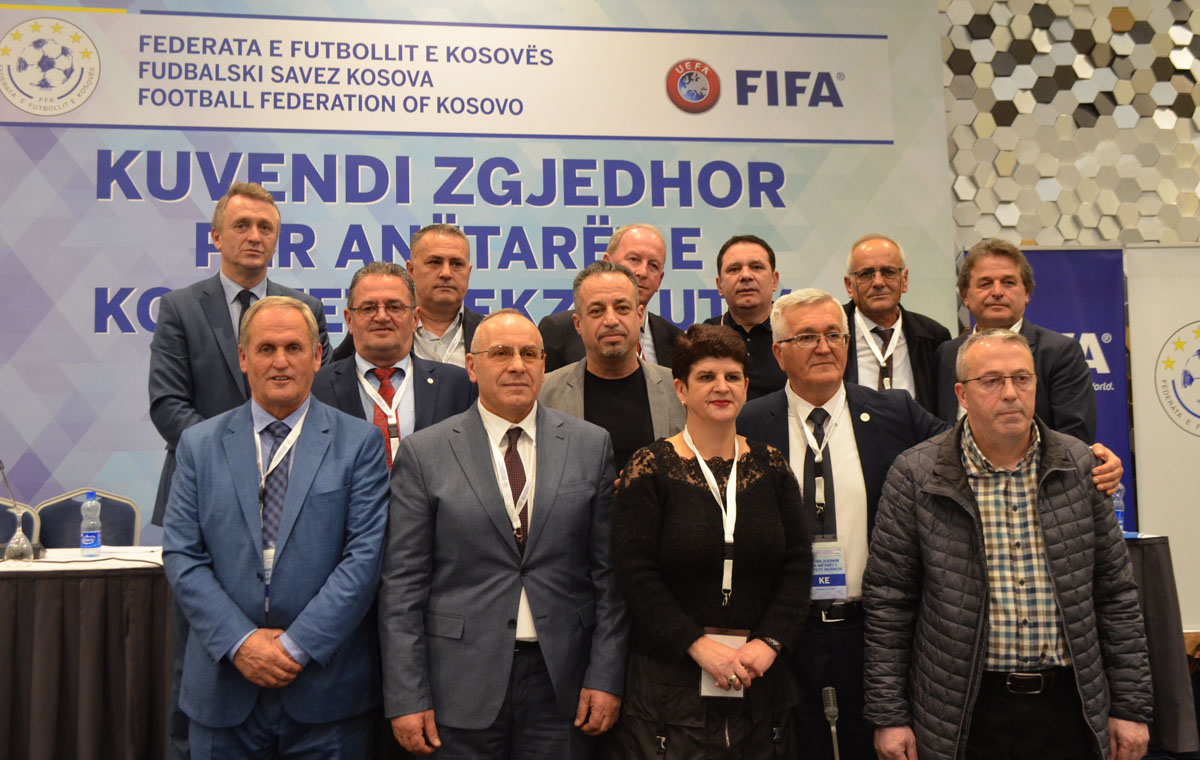 A club-licensing workshop for UEFA competitions is held